Please click ob the desired format to save the file

Please choose the format and type your e-mail address to send the file. 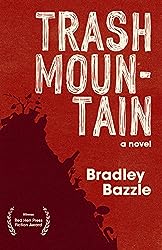 Title:
Trash Mountain
Editor:
Red Hen Press, 2021
Age:
Adult
Media type 1:
E-book
e-bibliomedia:
Open e-bibliomedia
Abstract:
A young man goes to war against a landfill in a novel that “revels in the absurd but never strays far from the deeply felt humanity of its characters” (Maceo Montoya, author of The Deportation of Wopper Barraza).Ben Shippers doesn’t have much use for school, friends, or pretty much anyone except his smartass sister, but he does harbor a secret passion: Trash Mountain, the central feature of the noxious landfill next to his house, the fumes from which have made his sister ill.After a botched attempt to destroy Trash Mountain with a homemade firebomb, Ben begins a years-long infiltration operation that leads him to drop out of school to work alongside homeless trash-pickers, and then, eventually, intern at the very place he meant to destroy. Ben’s boss there, a charismatic would-be titan of sanitation, shows Ben the intricate moralities of the trash industry, forcing him to choose between monetary stability and his environmental principles. With dark humor, Trash Mountain reflects on life in small southern cities in decline—and an adolescent’s search for fundamental values without responsible adults to lead the way.“From Mark Twain to George Saunders . . . Trash Mountain joins a long tradition of dark humor, wild inventiveness, and social satire in American letters. By turns hilarious, colorful, and strange.” —Maceo Montoya, author of The Deportation of Wopper Barraza“Chronicles the ways in which Ben’s early idealism erodes under more complex concerns . . . Bazzle’s novel explores the compromises one makes in life even as it blends the gritty and the extravagant along the way.” —Kirkus Reviews
Authors: